The answer could change the noise ordinance in Hoke County.

A complaint over chickens could lead to changes in the Hoke County noise ordinance.
Retired veteran Donnie Henderson likes to raise chickens on his four-acre property in the Reservation Road area of Ashley Heights. One of his neighbors must not be a fan of the chickens, Henderson told the Hoke County Board of Commissioners Monday night.
“These chickens bring me a great amount of joy. They get me off the couch and outside tending to them,” he said. “The chickens provide us with eggs and the occasional Sunday dinner…homegrown chickens and eggs just taste better, and I
(See NOISE, page 10)
know they are well taken care of.”
Henderson approached the board this week during the public comment period seeking help with four noise ordinance violation citations, all apparently due to complaints from a neighbor that his chickens were too loud.
“I don’t dispute that my chickens crow, but I do live in the country where chickens are supposed to crow,” he said. 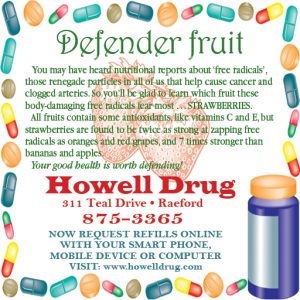 Under Hoke County’s local law, Henderson could be charged a fine of $100 a day for not complying with the ordinance. Instead, he asked the commissioners to consider changing the local policy to exempt chickens from falling under the noise ordinance.
“I am no criminal, just a man who likes his chickens,” he said.
Commission Vice Chairman Harry Southerland apologized to Henderson for the citations, thanked him for his military service, and inquired further into the matter.
“Was there some type of noise level in the ordinance?” Southerland asked.
“That remains to be seen. I received the citations, I don’t have a recording device…I have no way of knowing,” Henderson said.
At least one neighbor also has chickens and other livestock on his property, too, so there’s no way of knowing exactly where the noise is coming from, Henderson said.
The problem could come down to exactly how chickens are classified under the noise ordinance, Commission Chairman James Leach said in questions to board attorney Grady Hunt.
“Is a chicken livestock or is chicken a bird?” Leach asked.
Currently, chickens are simply classified as animals in the ordinance – but the ordinance could be changed to consider them livestock, Hunt said.
“I just believe chickens are livestock and we need to specify that in the ordinance,” Leach said.
The board members voted unanimously to hold a public hearing at the board meeting August 5 to consider changing the noise ordinance to include an exemption for livestock.
“I’ve been out there to tell my chickens to be quiet, but they don’t want to listen,” Henderson joked.
After further discussion among board members, Hunt said he would look at ways for the commission to address the citations Henderson already received.