Facebook Twitter Pinterest
By Catharin Shepard
Staff writer
Hoke officials are actively working on possible ways to address problems with trash thrown out on public roads across the county.
It’s the North Carolina Department of Transportation’s job to manage public roads, but without saying why, the NCDOT informed local government in January that the roadside trash pickup service isn’t operating in Hoke. “They are not picking up in the county, we have an email from them. That contract has not been taken in our county,” County Manager Letitia Edens said Monday. County sources said budget cuts could be to blame. The email from NCDOT Division 8 maintenance engineer Andy Cochran, sent to the county January 27, confirmed the issue.
“Unfortunately the litter contracts are no longer in place. Any litter pick-up request, outside of the current Adopt A Highway routes, will be addressed by the Hoke County Maintenance Unit and/or the Departments Roadside Environmental Unit,” Cochran wrote. “Please do bear in mind, litter pick-up is one of many maintenance activities that the Department performs. Litter is certainly an issue in Hoke County, as well as statewide and with help from enforcement agencies, maybe could be deterred.”
Residents have repeatedly complained about the issue, from sending letters to the editor of the News-Journal to making comments during the public input sessions of county commission meetings. Commissioners responded last month with an open letter published on the county website, stating that they share citizens’ concerns.
“It’s a shame to see the beauty of Hoke County spoiled by litter and other items dumped by the side of the road. The NC Department of Transportation is responsible for maintenance of Hoke County’s public roads and their right-of-ways. It is up to DOT to prioritize their schedule of roadside cleanup,” the letter stated. “We have contacted DOT several times in the past asking them to prioritize issues in Hoke County. Join us in contacting the DOT and letting them know your concerns.”
Right now, Edens said, she and county Solid Waste Director Don Russell are in the process of looking at how NCDOT was picking up the litter, and ways the county might be able to take action. They’re being careful because it’s a potentially expensive matter and officials don’t want to bypass a service the county should be getting from the state agency, Edens said.
In the meantime, if a resident notices roadside littering, they can contact the NCDOT and county solid waste to report the problem. The county has been getting frequent phone calls about trash along the roads, and it’s one of the biggest issues the manager’s office is dealing with right now, Edens said. 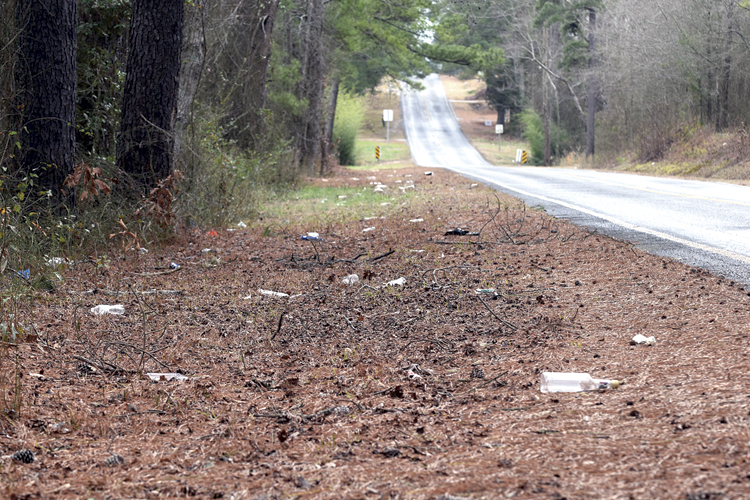