Home News Related: DNA match brings surprise
News
February 12, 2020February 25, 2020
1 0
By Catharin Shepard
Staff writer
When Desi Campbell took a genealogy DNA test in 2016, he hoped the results would help him connect with relatives he didn’t even know he had. It did, but not in a way he – or his extended family members – ever expected.
Campbell is black, grew up in Washington, D.C., and has family in Hoke County and across the Sandhills. Deena Hill of American Fork, Utah is white, with family roots in Italy from her father’s side of the family and English heritage on her mother’s side. The DNA test results told the complete strangers they were related.
Not only that, it was a strong match, Campbell recalled.
“It was really funny, because she emailed me. They’re Mormons and they’re very adamant about their genealogy,” he said. “I was like, I don’t know any of these people.”
Campbell and Hill connected through an online ancestry website that allows people who purchased DNA tests the chance to contact others with similar results. Campbell took the DNA test because he was curious about his family’s history.
“I never knew my great-grandmother on my father’s side, I never knew any of that group. By the time I had gotten to know any of them, most of them had passed away,” he said.
Once Campbell and Hill started talking, it took lots of digging to uncover the shared history that had its beginning in the days of slavery in the United States. Like many African-Americans, Campbell wasn’t sure how far back he would be able to trace his lineage. As it turned out, he was able to go back a long way and find detailed information about his ancestors.
“Even with both sides of my family, I’ve been able to track slave records from the actual slave owners, and actually look at these documents and see my relatives’ names in the documents,” Campbell said.
Campbell and Hill followed their shared roots and discovered they are actually first cousins, five times removed. The connection came from a sister and brother, Jane and Gabriel McNeill, who were two of 13 children born to enslaved parents Sarah and Sherod McNeill of Harnett County.
That was also the point where their racial backgrounds diverged, they learned. Gabriel McNeill is Campbell’s third great-grandfather, and his side of the family is African-American. Jane McNeill became pregnant with the child of Wiley Holder, the white nephew of slave owner William Holder, and her son Nelson Holder Ritchie was Hill’s third great-grandfather.
Around that time, the Holders lost their land and their slaves, Campbell said. A neighbor named Neill McNeill took several of the McNeill family members to Missouri, where they ultimately became free men and women. Ritchie eventually moved to Utah, got married and had children of his own.
Over time, his descendants lost the knowledge of their ancestry until Hill and Campbell found the unexpected connection, more than 160 years later.
“It has been a wonderful journey. We have done a lot of work,” Campbell said.
The tale of their intertwined family history took years to slowly piece together. Campbell and Hill were able to go back even further. They even found the plantation owners in Harnett County whose surnames, McNeill and McLean, are today the surnames of many of the free descendants of the enslaved people who lived on those plantations.
The entire experience not only brought two long-lost cousins together, it also helped Campbell find dozens more of his relatives living across the United States. An 1800s census from Harnett County told him his fifth great-grandmother’s parents were born in Africa sometime in the 1760s. DNA test results suggest his ancestors were originally from Cameroon, the Congo, Benin, Togo and Nigeria.
Campbell flew out to Utah to take part in a special family reunion, so he could meet Hill and others who were descended from Ritchie. He ended up being the only African-American there.
“It didn’t make a difference, they treated me like they’d known me all my life,” he said.
Hill returned the favor by visiting North Carolina. They’re now planning another reunion.
Campbell has since written a book, “The McNeill Story,” about the process of uncovering his family’s history. Hill collaborated with him on the research for the project.
Thanks to his experience, Campbell wanted to help other African-Americans research their own family histories.
“I’ve connected with cousins that I had no idea even existed, and it’s because of the internet, because of DNA,” he said.
Campbell launched an African-American heritage festival held to celebrate Black History Month in Harnett County. The festival is set for Saturday, February 15 from 11 a.m.-3 p.m. at Erwin Church of God, 109 West C Street in Erwin.
Campbell is also working on putting together genealogy workshops to provide support and guidance for other African-Americans interested in trying to uncover the stories of their ancestors. He additionally plans to appear alongside Kenyatta Berry, host of PBS TV show Genealogy Roadshow, at an upcoming event at Campbell University’s Scott Concert Hall. For tickets or more information on the events, visit Campbell’s website, https://africanamericanexperience.org. 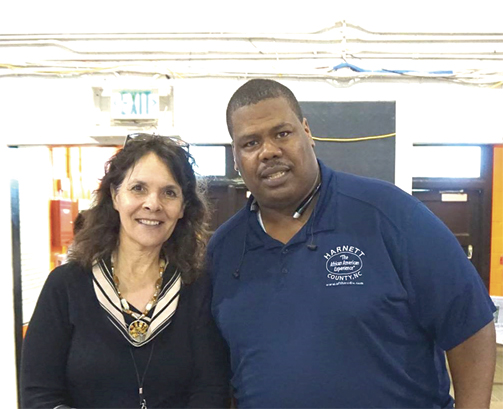