Home News County to cut, plant trees at community forest
News
February 19, 2020February 25, 2020
1 0
By Catharin Shepard
Staff writer
Foresters will use timber thinning and controlled burning to clean out parts of the Hoke Community Forest and replant it with native longleaf pine trees under a newly approved management plan.
A steering committee of stakeholders created the plan by working in conjunction with local officials and an experienced forester. The Hoke County Board of Commissioners approved the management plan Monday.
The county will work with Jesse Wimberley, coordinator for the Sandhills Prescribed Burn Association, licensed forester Robert Drummond of Milliken Forestry and the North Carolina Forest Service to manage the community forest.
The Hoke Community Forest, located off of Vass Road, is a publicly owned forest that’s unusual to find in this part of the United States.
“Hoke Community Forest, not very far from here, is the only community forest in the southeast. It is a very unique property, and Hoke County is a very special place for having it,” Wimberley said. “This really puts you on the map as the only place that has a community forest.”
The Conservation Fund originally bought the 532 acres of land from the International Paper Company. The nonprofit organization then worked to obtain grant funds to help Hoke County buy the $1.3 million property in 2013.
The property is not untouched forest. The International Paper Company cut many of the original trees decades ago and planted much of the land with loblolly pine, using it as a crop for making paper, Drummond said. The management plan would cut down some stands of the hardwoods – in some areas, clear cutting the trees – in order to reforest the land with native longleaf pine, restoring it to its original ecosystem.
Commission Vice Chairman Harry Southerland asked about what the impact would be for citizens.
“What kind of effect would it have on the climate for the public?” he asked.
The plan does mean citizens will see some areas of the forest along the road clear cut, which can be a “big shock,” Drummond said.
“A final harvest of timber looks pretty rough. It just does. We do the best we can, we cut it down, get everything on the ground, lay it down. Initially it’s a big shock because trees have been there as long as people have been driving up and down that road, and all of a sudden, it’s, whoa,” he said. “It’s a very common practice. We go back, we plant trees, do everything we can to prevent soil erosion.”
Milliken Forestry has an endangered species expert on staff, who will examine the areas proposed for timber thinning to make sure there won’t be any impacts to threatened wildlife or plants, Drummond said. There is also a more strict conservation easement in place around the wetlands areas of the community forest that completely prohibits cutting, so those areas will be left untouched. The existing stands of longleaf pine in the forest will also be left uncut.
The North Carolina Forest Service, like Fort Bragg, commonly uses small controlled burns to clear out underbrush on Sandhills public lands. By doing so, it lowers the likelihood of a more destructive wildfire getting a foothold and burning out of control. Some native Sandhills plants and trees even depend on occasional fires as part of their life cycle.
“It’s a good thing to do in cautious circumstances and it really produces an open understory, a lot better for wildlife, and a lot better for timber management,” Drummond said.
The North Carolina Forest Service will pay for and conduct the controlled burning, and the harvesting will be paid for by whatever timber company is contracted for the work.
Once the plan is put into place, the county could bring in about $230,000 from selling the timber. Commissioner Bobby Wright, who serves on the steering committee, suggested a plan to put half of the money into the General Fund, and half into a dedicated line item to pay for future upkeep of the forested land.
Another benefit to the plan, Wimberley said, is that the community forest will be a more inviting place for hiking and other activities.
“Not only can folks get out and walk in it and feel safe when we open it up a little bit where it’s more inviting to go into, we could see other groups, scouts, school groups,” he said.
It will take between 18 months and three years to complete the management plan, Drummond estimated. It will take longer than that for the newly planted longleaf pine trees to grow in, but in the future it should return the Hoke Community Forest to its native environment, he said. 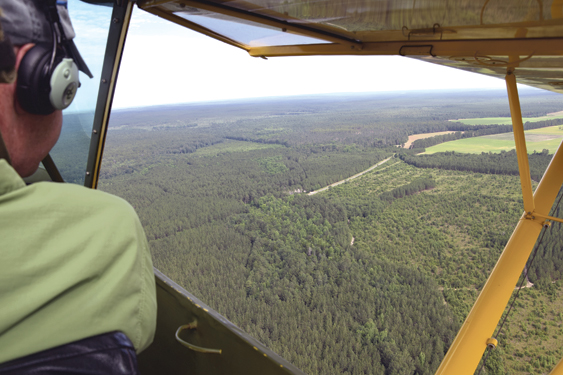