Facebook Twitter Pinterest
By Catharin Shepard
Staff writer
The first week of early voting got off to a slow start Thursday, with plenty of time left for voters to cast a ballot ahead of the March 3 primary election.
“It’s been slow,” Hoke County Elections Director Towanna Jackson said of the turnout Monday. Between the two one-stop early voting sites in Rockfish and Raeford, 423 people came out in the first three days to cast a ballot.
Jackson checked with other counties and found that they’ve experienced a slow start to early voting, too, but believe things will pick up as the campaigns move closer to the primary date.
Hoke County has more than 30,000 registered voters, including 13,779 registered Democrats, 9,760 registered Unaffiliated, 6,402 registered Republicans, 225 registered Libertarians, 28 registered Constitution Party and seven registered Green Party voters.
Sample ballots for the Republican, Democratic, Constitution, Green and Libertarian political parties are available online at https://www.hokecounty.net/235/Elections. People who are registered as Unaffiliated may choose to vote on a Republican, Democratic or Libertarian Party ballot. The Constitution Party and Green Party only allow people registered as a member of those parties to vote on those ballots in the primary election.
Voters do not need to bring photo identification to vote in the one-stop early voting. Identification and proof of address is required for registering to vote.
The county is operating two sites as one-stop early voting locations. The Board of Elections Office, located at 227 North Main Street in the Pratt Building, and the Rockfish Community Center, located at 2749 Lindsay Road, are open for early voters.
The early voting period runs until Friday, February 28. The polling sites are open Monday-Friday, from 8 a.m.-7:30 p.m. Weekend voting will be available Saturday, February 22 from 9 a.m.-2 p.m.; Sunday, February 23 from 2 p.m.-6 p.m.; and Saturday, February 29 from 8 a.m.-3 p.m.
People who aren’t registered to vote may register during the one-stop early voting period. Registrants signing up to vote using the same-day registration must attest to their eligibility and provide proof of residence.
The Saturday before the election is the last day to vote during the one-stop early voting period. Only the Board of Elections and Rockfish locations will be open during early voting.
The partisan primary election is set for Tuesday, March 3. All of the county’s polling places will be open from 6:30 a.m. to 7:30 p.m. on March 3.
Voters will cast ballots in several local primary contests. In some cases, the primary election will likely decide the race, as only candidates from one party filed to seek office. In other races, the winners from the primary will go on to face candidates from another political party in the General Election in November.
Some of the local and state offices up for election this year include Hoke-Moore District Attorney, two seats on the Hoke County Board of Commissioners, Hoke County Register of Deeds, N.C. District Court Judge 19D Seat 4, North Carolina Lieutenant Governor, and North Carolina Governor. Filing for election to the Hoke County Board of Education and Soil and Water Conservation Board will open this summer, as those boards are nonpartisan.
For a full list of candidates, visit the North Carolina Board of Elections website at https://www.ncsbe.gov/index.html, or the Hoke County Board of Elections website at https://www.hokecounty.net/235/Elections. Call the Hoke County Board of Elections with questions on registering to vote or other election-related matters at (910) 875-9062. 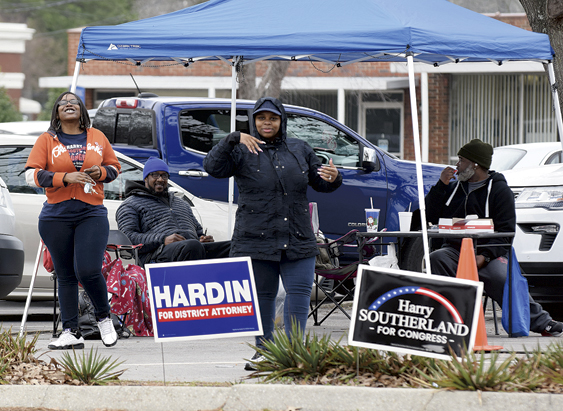