Home News Savage wrestles in championship
News
February 26, 2020March 10, 2020
0
By Ed Clemente •Sports Writer •
Hoke County High School senior Josh Savage wrestled in the 2020 NCHSAA State Wrestling Championships over the weekend in Greensboro. Due to the winter weather on Thursday, the first round and quarterfinals were both held Friday evening. I had a chance to talk with Josh prior to his first match. He was very excited making it to states which is the first time in his high school career. One of Josh’s favorite wrestling moves is the ankle picks, he said “With the big boys, you get their head down, get their ankles and they fall right on their back!” Josh feels his key to success this year was keeping the right mindset, “I’m going to states and I’m going to win it”. During his senior year he most enjoyed traveling to the various meets and getting to know and befriend fellow wrestlers. Although the excitement of the day was causing Josh to have some butterflies and nervousness, he won his first round 4A 285lb defeating Nicholas Glasgow (Ragsdale) by way of a 7-2 decision. His quarterfinal match was a late one, not getting underway until 11:30pm. For the quarterfinal 4A 285lb round, Josh was matched up against George Ayino (South Central, 55-5). I had the opportunity to watch various matches prior to the quarterfinals, this match was one of the most even matchups of the night. It wasn’t until the final 25 seconds of the second period that anyone scored a point, unfortunately the point went to Ayino. The third period went scoreless and George Ayino went on to win a 1-0 decision over Savage. Josh fought very well in a tough match and it showed his skill by only allowing one point to Ayino. With Josh’s last match starting so late, he had very little time to sleep before being required back at the Greensboro Coliseum for weigh-ins at 7am Saturday. In the 4A 285lb Consolation Quarterfinals Saturday morning, Jayln McClammy (Ashley, 31-8) won by decision 7-3 over Josh Savage (Hoke County, 21-5). Josh finished the weekend in 6th place and a very respectable 22-7 overall record for the year. Speaking to coach Walworth Friday night after the quarterfinals, he said the night went as he thought it would. “Josh could have had a chance to win the quarterfinal if he would have been able to shake Ayino off his hips and stand up”. He felt Josh did very well over the season, he wished he could have attended more of the bigger tournaments to improve his overall record but he was still happy about his overall performance. Walworth feels the boy’s team did well this year. For the most part the team is young, only having three seniors. Coach is in the process of building up the girl’s wrestling team for next year by trying to bring on board some of athletically inclined girls at Hoke that are not involved with basketball, in addition to recruiting 8th graders from the local middle schools. Any girls that may be interested in wrestling next year are invited to attend the college showcase which will have recruiters from four different colleges in attendance on Saturday, February 29th. Registration starts at 9 a.m., sessions start at 10am and should be complete by 3 p. 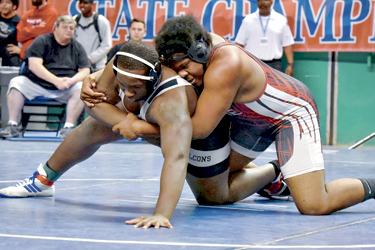