Facebook Twitter Pinterest
By Catharin Shepard •
Staff writer •
Incumbent Hoke County Commissioner Bobby Wright has requested the Board of Elections conduct a recount of a close race between himself and candidate Lonnie Baldwin.
“Mr. Wright has asked for a recount,” Hoke Elections Director Towanna Jackson said Tuesday.
In the preliminary results of the primary race for two seats on the county commission, Baldwin had 33 votes more than Wright. On election night last week, election officials said the race was too close to call at the time because they still had to count late absentee ballots and provisional ballots.
So far they’ve counted late absentee ballots, with the provisional ballot count set for this Thursday. The late absentee count did not alter the preliminary outcome of the race with Baldwin still up over Wright, Jackson said.
“We had a few absentees on Friday but it didn’t change the outcome,” she said.
The count after the late absentee ballots was at 2,495 votes for Baldwin and 2,462 votes for Wright, leaving the difference at 33 votes in favor of Baldwin, according to the State Board of Elections numbers.
A candidate may request a recount if the result of an election contest has a margin of one percent or less. According to the North Carolina State Board of Elections, as of last week Baldwin had 29.36 percent of the vote while Wright had 28.97 percent, a difference of less than one-half of a percent, allowing Wright to request a recount.
The recount will take place next Wednesday, Jackson said. Election canvass is scheduled for Friday, March 13.
Incumbent Commission Chairman James Leach received 3,542 votes in the primary and secured one of the two available nominations for the Democrats. The two candidates who go on to the General Election in November will face Republican candidates David Frump and Christopher Holland in the race for county commissioner.
Wright has served on the county board for two decades, and previously served for 10 years on the school board. Baldwin previously sought election to the county commission in 2016.
Local turnout in the partisan primary election last week was about 24 percent, with a reported 7,439 voters out of 30,471 registered voters in Hoke County going out to the polls, according to the State Board of Elections.
Filing for nonpartisan races will open this summer for the county Board of Education and the Soil and Water Conservation Board. Many local and state races will be contested in the General Election in November, including State Senate District 21 and State House of Representatives District 48. For more information on local and state elections and complete unofficial primary election results, visit https://www.hokecounty.net/235/Elections or https://www.ncsbe.gov. 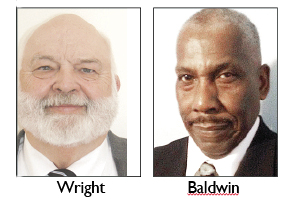