Home News ‘Freedom Park’ to feature document replicas
News
March 16, 2020March 16, 2020
0
By Catharin Shepard •
Staff writer •
Local officials and representatives from the nonprofit organization Foundation Forward broke ground last week on the new “Freedom Park” in downtown Raeford. The park will feature monuments displaying replicas of some of the nation’s most historic documents, including the Declaration of Independence, the U.S. Constitution and the Bill of Rights.
“We’re excited to be a part of this community. It has been a long time coming,” Foundation Forward communications director Mike Unruh said.
The new display will be located on the former site of the old Raeford Hotel, which was torn down more than a decade ago and today is a grassy lot at the corner of Main Street and East Central Avenue in Raeford. The city and county both contributed over $50,000 toward the project.
The “Charters of Freedom” project got its start nearly 10 years ago when Vance and Mary Jo Patterson of Morganton visited Washington, D.C. and were touched to get to visit historic documents on display at the National Archive. It made them realize that many Americans never get the opportunity to travel to the nation’s capital and have similar experiences.
“They wanted to share that with their community. They started to think, how come we’re in our mid-60s and this is the first time that we’ve seen these in our lives, and how many people across the entire country never get a chance to see the documents that provide our freedoms, provide our liberties and secure our nation?” Unruh said. “They went back home to Morganton and started trying to think of a way to recreate the experience.”
In response, they created Foundation Forward with the goal of putting “Charters of Freedom” monuments, including replicas of those historic documents, in communities across the country.
So far the 501c3 nonprofit has helped install the monuments in nearly 30 locations across the United States. They are in about 20 counties in North Carolina, mostly in Western N.C., and in states including Kentucky, Indiana, Nebraska, Nevada and South Dakota. Now, Hoke County will join the list as funding from the county and city goes toward the site preparation and construction of the new “Freedom Park” in Raeford.
Hoke County commissioners became interested in bringing one of the monuments to the county last year after seeing materials about the nonprofit at a conference. Shirley Wright, wife of Commissioner Bobby Wright, was a particular driving force for it, Unruh said in remarks during the groundbreaking. County Economic Development Director Will Wright and the Downtown Beautification Committee likewise supported the proposal, hoping that it could bring additional interest to downtown Raeford and serve as an educational tool for local schools.
The project will also include a time capsule buried underneath the display, containing items from Raeford and Hoke to capture a snapshot of the community in 2020. The time capsule will be opened on July 4, 2076, the 300th anniversary of the adoption of the Declaration of Independence.
The organization additionally plans to offer a “field of honor” of engraved bricks for sale that will go around the monuments. The bricks are available in two different sizes for $100 or $250 donations.
For more information on the nonprofit Foundation Forward, visit https://chartersoffreedom.com. 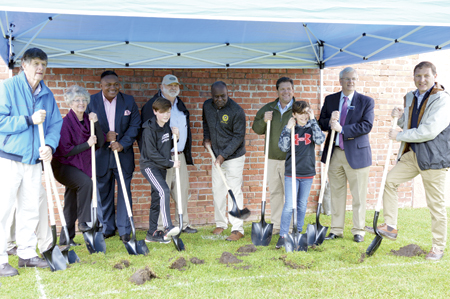