Other Stuff, not necessarily the news

Home News Other Stuff, not necessarily the news
News
March 16, 2020March 16, 2020
0
By Ken MacDonald •
Is it “red and yellow, pet the fellow,” or “red and yellow, bite a fellow?”
Becky, the alleged Texas tour guide, was no help to us last week as what seemed to be a coral snake suddenly darted across the bike path in front of my sister, sending her backwards in what appeared to be a reverse gear I didn’t know bicycles possessed. I snapped a photo of the still-angry and writhing snake as one might the victim of COVID-19—close enough to possibly get him in the frame (with a healthy degree of digital zoom), and texted it back home to Catharin, the News-Journal’s recently-much-awarded writer and reporter, who doubles as Hoke County’s less-appreciated snake expert. Very quickly I got word back: “Uh Ken is that real because do not touch,” she wrote. “That’s a coral snake,” she added. “Do not touch they’re very venomous. Red and yellow bite a fellow.” Well sheesh, Catharin, I thought, there’s no danger I’m going to touch it—I just wanted to know whether I should try to run faster than my sister and my wife. And now I can tell Becky what the correct saying is.
Don’t get me wrong. We liked Becky. Friendly and quite agreeable, she is a 30-year-old professional firefighter for San Antonio, but her mother has her leading bike tours of the city’s famous missions on the side for the family business. Let’s just say tour leading is not her forte.
“This tree was planted in honor of J.F.K. because his last stop before being killed in Dallas was here in San Antonio,” she said when we stopped at the memorial.
“What kind of tree is it?” I asked.
“Um, no one’s ever asked me that,” she said. I Googled it and told her it was a honeylocust. My sister, meanwhile, had stepped behind Becky to look at the plaque. “Says it right here,” she said.
Says Becky: “Oh, I guess I should read some of these plaques.”
At the first mission on the 10-mile ride: “You guys can go inside if you want,” she said, “but I’ve already seen it.”
“It won’t open for another 30 minutes,” she added. My sister walked up to the door, found the building was open, and walked in.
I can’t think of anything Becky got right.
We taught her what primrose looked like, and filled her in on some of the history of the area.
A short time later, we were viewing San Jose, the most famous of the missions (aside from The Alamo). “This section of the church is the only original plaster left,” she told us, as she pointed to a small patch of brightly-colored stucco. We were looking at nearly 300-year-old crafting. While we were standing there, a guide leading a group of about 25 approached. “This section is a re-creation of the original plaster so you can see what the mission would have looked like,” he told them.
Becky turned to us, and shrugged. “Now we know,” she said.
She then beckoned us to follow her to the left, and turned right. 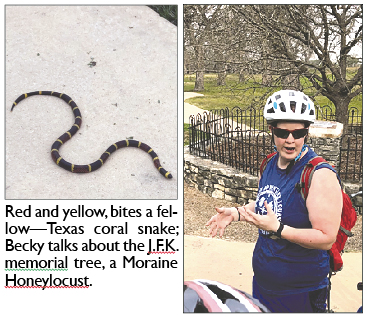