A driver allegedly exceeding the speed limit ran off the road and crashed into Hillcrest Fire Department early Easter Sunday morning, according to a report from the North Carolina Highway Patrol.

Jada McLeod of the 100 block of Lantern Lane in Raeford was driving about 70 miles an hour in a 45-mile-an-hour zone when she apparently lost control, according to the report. Her 2018 Dodge crossed the centerline of U.S. 401 Business, overcorrected and went off the road. The vehicle jumped the curb, slid nearly 300 feet across the fire department’s front yard and crashed through the building’s brick wall.

McLeod suffered injuries and her vehicle came to rest partially inside the fire station.

“Luckily there was nobody here,” Hillcrest Fire Department Assistant Chief Mark Sykes said. The accident happened around 8:30 a.m. Easter Sunday and the station’s volunteer and paid firefighters were at home.

The station’s firefighters were among the responders who got the call of a vehicle striking a building. About 30 Hillcrest firefighters showed up when they heard the station’s address on the emergency call, Sykes said.

“Pretty much everybody came who could,” he said.

Rescuers transported McLeod to FirstHealth Hoke hospital in Raeford for treatment of her injuries. The firefighters weren’t really able to talk to her about what happened, but got more information from the highway patrol’s report, Sykes said.

Many of the station’s firefighters stayed to help with the cleanup. They couldn’t lock up and leave the building secure because of the hole in the wall. The Highway Patrol gave the fire department the okay to start repairing the damage.

Even though it was Easter Sunday, local company J&K General Contractors came out to help clean up and begin repairing the damage. Wild Iris Florist also helped out by dropping off sandwich fixings to feed the crews.

“By about 2 p.m. we had everything cleaned up and had the building secure,” Sykes said.

The department is fully insured and is in the process of having talks with the insurance companies and adjustors. While they don’t have an exact estimate of the damages, the highway patrol report estimated the damage at about $50,000 to the building, and $4,000 to McLeod’s vehicle. 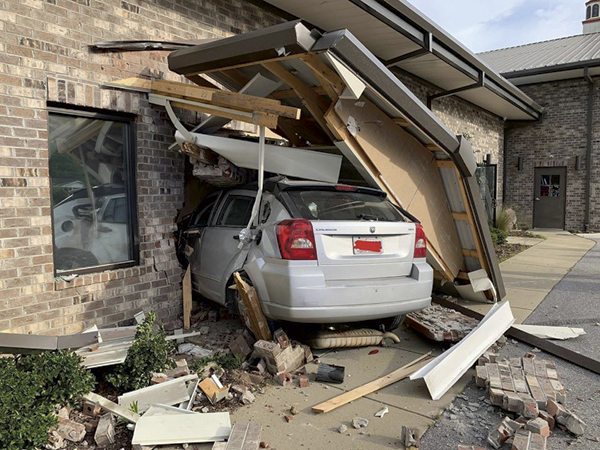