Before the COVID-19 pandemic hit the United States in March, Hoke County was working on a number of building projects. Those projects are still in the works, although one is far closer to being done than the others.

A new courthouse annex, a Parks and Recreation center with the county’s first public swimming pool and the Robert A. Wright Hoke County Agriculture Center are all projects the county has been working on for the last several years.

Officials are focusing their efforts on the county’s other needs while responding to COVID-19, but as the county prepares for budget workshops, County Manager Letitia Edens also gave an update Monday on where things stand with the construction plans.

“They actually will be completed with that, we have a roughly May 15 date that I should be handed keys,” she said.

Then the Hoke Cooperative Extension offices will move into the newly completed building, which also includes meeting space, kitchens and other features. The building is named for long-serving commissioner and local farmer Robert “Bobby” Wright.

The commissioners planned to tour the building Friday morning. New signs have gone up outside the building, which is located on Palmer Street next to the Hoke County Health Department.

The county will likely hold a soft opening for the center, officials discussed. Any grand opening ceremony would have to be limited depending on the number of people allowed to gather in one place at a time under Gov. Roy Cooper’s executive orders.

The county paid cash for the roughly $4.8 million building. The funds came from money set aside over a period of several years for capital outlay projects.

Meanwhile, the county is waiting to hear estimates from an architect firm in Moore County to learn how much it could cost to build a Parks and Recreation Center. The county previously worked with another company on the project, but changed course and hired a different architect in hopes of saving money.

The center would include proposed amenities such as a swimming pool, walking track, gymnasium, office space and more. The county purchased property on U.S. 401 near Scull Road for the center. New grant funding will allow the county to run sewer lines to the area.

It’s likely the county will set aside some money in this year’s budget for the project, Edens said. The amount is not yet determined, and will depend on what commissioners choose to approve during budget talks.

The most recently proposed project is also the one still in the earliest stages of development. Hoke County Commission Vice Chairman Harry Southerland is the chairman of a committee studying the feasibility of building a new courthouse annex. Southerland confirmed that the committee’s meetings are on hold for now due to the COVID-19 pandemic.

The committee formed last summer around the same time that Senior Resident Superior Court Judge James Webb of Moore County ordered inspections of the Hoke County Courthouse. The inspections revealed possible health and safety problems at the century-old facility. The county has conducted maintenance work at the courthouse since then, with Webb still strongly urging the county to build a new courthouse facility.

In other business, the county board took the following action Monday:

•Denied a sewer waiver request for the 33-lot Winchester subdivision

•Approved a rezoning application by J&K General Contractors to rezone two parcels and part of a third parcel of land, about 27.59 acres total, on the west side of Townsend Road from Residential Agricultural (RA-20) to Residential (R-8)

•Approved an amended consent agenda, including a request from the Board of Education to use remaining capital outlay funds for improvement work on a school sports field •Approved a funding plan for the Juvenile Justice Crime Prevention Council’s 2020-2021 fiscal year; the plan includes funding for multiple programs for youth, including Teen Court •Approved a revolving loan fund request for $200,000 for Sun Path, which will bring a total of 20 jobs to the area

•Approved acceptance of a $1.4 million grant from the Golden LEAF Foundation for sewer line extensions on U.S. 401

Edens also updated the commissioners on budget processes, and set a three-day budget workshop for county department heads to present their budget requests to commissioners. The county is in the process, and in some buildings has already installed plexiglass barriers to provide some protection between staff members and the public. The protections are part of preparations for possible reopening under the governor’s three-phase plan in the coming weeks.

The board did not hold a closed session and adjourned. 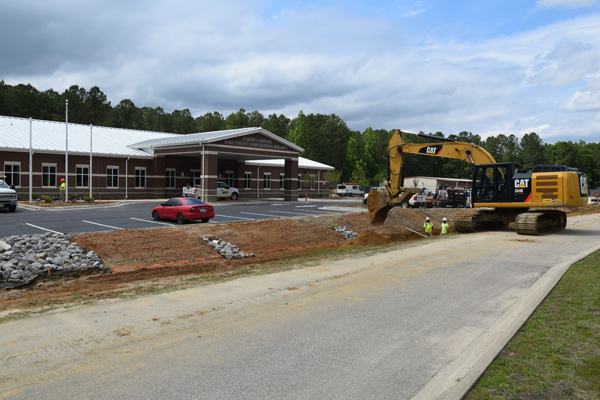