A doorbell camera caught footage of the events that played out last month in a subdivision at the Hoke County line as two people stole a car, and the victims pursued.

The incident happened around 2:20 p.m. April 28 on the 7700 block of Adolphus Drive, just off of Cliffdale Road near the Hoke/Cumberland County line, according to a report from the Fayetteville Police Department. Two unknown suspects, a man and a woman, apparently took off in a 2006 Dodge Charger belonging to Shakirah Hamilton.

Sgt. Jeremy Glass of the FPD community affairs office confirmed what the recording showed. Hamilton apparently left the vehicle running in the front yard unattended, and the two suspects got into the car and drove off, Glass said in an email. The victims chased after the car thieves, with the doorbell camera catching part of the chase.

Video from the doorbell camera shows the stolen Dodge Charger driving down a street in the subdivision. A person driving a van followed after the stolen car, and a person in front of one of the houses also began running through the neighborhood after it. The recording picked up the sounds of shouts, squealing tires and honking horns.

A woman off-screen commented that a man had a gun in his hand, just seconds before gunfire erupted. A few moments later the stolen car turned around, drove through another resident’s yard and accelerated in the opposite direction. The van followed behind, and a neighbor shown on the camera walked out of frame to ask if a person off screen was all right.

Hamilton was able to get the car back, Glass said, after the thieves ditched it.

“The vehicle was eventually abandoned in Hoke County,” he said in an email.

The case is pending further investigation. 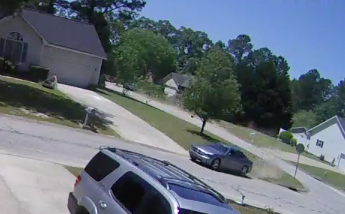