Hundreds of people marched through downtown Raeford Friday afternoon, many carrying signs and wearing shirts with messages speaking out against racism, and local law enforcement leaders walked with them.

It was the second of two peaceful protests held in Raeford last week after the death of George Floyd May 25 at the hands of Minneapolis police. A public viewing and televised memorial Saturday in Hoke County, where Floyd’s sister Bridgette Floyd lives, drew crowds of thousands and an audience of millions from across the world.

The “Hoke County Peacekeepers,” a new grassroots organization, led a diverse group of marchers down Main Street from Harris Avenue to Prospect Avenue. The crowd chanted, “What do we want? Justice!” and “black lives matter.”

Hoke resident Aaron Priestman waited by the library and helped hand out water and snacks to protesters during the hot afternoon. His wife and daughter stood along Main Street holding signs in support of the marchers.

“I want to support this movement because as everybody is saying, black lives matter, and if their voices aren’t heard then no voices are heard,” Priestman said.

The marchers rallied at the library stage, where Hoke County Peacekeepers organizer Le’tour Ardel and other members of the group held a program with guest speakers and calls for an end to systemic racism in the justice system. A bishop offered prayers and a message of faith. The program honored George Floyd and other black Americans who died at the hands of law enforcement by reading statements written from their points of view.

“You can’t see what we can see up here, I wish you could turn around and look, but this is amazing,” Godwin said from the library stage. “We see no particular one race, no particular one gender, everybody is here from all walks of life and it is a blessing to sit here and look.”

“I want you to know we do not condone what happened. It is wrong, and it tears us apart,” he continued. “We spend years of our lives, I spent 25 trying to fill those gaps, build those bridges, and it takes seconds, I said this the other day, it takes seconds, or in this case eight minutes and 46 seconds, to tear all that apart. Tear it apart. We’re having to start over. Our whole lives…it feels like everything we worked for is in vain, but you’re showing that it’s not, and we appreciate you being here, the police do.”

In his remarks to protesters, Hoke County Sheriff Hubert Peterkin led the crowd in one of the chants of the day, “No justice no peace, no racist police.”

As the father of a young black man, Peterkin said he himself has had tough conversations with his son about systemic racism and police violence. The movement of young people today fighting for their rights is “taking it to a whole other level,” the sheriff said.

“We’re living the dream of what King did. But this new group is taking it to a whole other level,” he said. “When I talked to him (Ardel) and he talked to the chief, and he told us it was going to be peaceful, look at how beautiful this is. Unbelievable.”

The sheriff touched on the situation in Cumberland County, which saw looting and property damage as well as peaceful protesting. Peterkin praised Raeford and Hoke County, and the Hoke County Peacekeepers for speaking out peacefully.

“I was telling the chief coming down the road, right across the (county) line they’re burning, tearing down their businesses and tearing up things that it took them years to build, but look at Hoke County. Look at Raeford.” Peterkin said. “Hoke County, let me tell you something. Young people, we hear you. We hear you. Thank you for not taking advantage of doing something totally different. You’re going to get it done. We’re with you. Trust me, we are with you. And listen, don’t let this be the end of something…this is about peace.”

“I have an issue with the fact that when that man put his knee on George Floyd’s neck and held it there for nine minutes, never in his mind did he think he would get in trouble for what he was doing. I say that because we’re making a mistake by the world pointing a finger at him as an officer,” Thomas said. “We need to point a finger at the system that has allowed people to think they can do whatever they want to do to us and get away with it. Because if you only point a finger at him, and he goes to prison, then you allow the system to continue. That won’t protect you or I, it won’t protect my 10-year-old son who asked me yesterday, dad, are police good or bad?”

Thomas spoke about an experience he had in 2014 with a law enforcement officer in Cumberland County. He didn’t speak up at the time, but now plans to file a complaint against the officer, Thomas said.

The commissioner praised the protest organizers for their work.

Terrell Stephens, who grew up in Raeford, addressed the crowd about his experiences protesting police brutality across America.

“I know what the ugly side of police brutality looks like, because I’ve lived it. But 57 years ago, Dr. King stood on the steps of the Lincoln Memorial, and he told that America is bankrupt, because they had written a check that’s come back insufficient. This wasn’t a check from Wells Fargo, PNC or Bank of America, this was a check from the bank of freedom, written in the blood of our ancestors, and signed by the promise of America, that this country would treat black people the way we deserve to be treated,” Stephens said. “We built this country for free. I’m going to say that again. We built this country for free. And we expect the human decency to be treated like humans when we interact with the police.”

Other speakers included B.J. Gibson, who said he came from Scotland County to participate in the event, and former Louisiana sheriff’s deputy Roosevelt Howard who shared his experiences as a black man who used to work in law enforcement.

“I experienced police brutality while wearing a badge on multiple occasions. They didn’t care. It didn’t matter that I went through the same training that they did, to protect the same people that they protected. When they put that badge on, it was a sense of false power. When I put my badge on, I was a servant to my community,” Howard said. “But because I didn’t play ball, I was pushed out, blackballed. Everything I worked for for five years, nothing.”

“Long before I put that badge on, I was black. And long after I took it off, I’m still black,” he said.

Ardel spoke about why he created the Hoke County Peacekeepers group, which grew tremendously in just four days.

“This is only the start of a new beginning. I want everybody to know because I’ve been seeing some nasty comments, people asking why do we need Peacekeepers, why do we need that, we’ve got local law enforcement,” Ardel said. “Well, see a lot of people aren’t comfortable talking with these guys. Not saying they’re bad people, they’re just not comfortable because of what’s been going on. So what I’m trying to do with the Hoke County Peacekeepers, I’m trying to shorten that gap. I’m trying to bring us, the community, closer to these officials and law enforcement.”

The rally Friday was the second held in downtown Raeford last week. About 60 people participated in a march Wednesday afternoon organized by Walking By Faith Divine Ministry. Accompanied by Godwin and with a police escort conducting traffic, the marchers sang gospel music as they walked with signs down Main Street and onto East Central Avenue.

The march Thursday ended at the Hoke County Sheriff’s Office, where a number of deputies came out and crossed the street to join the protesters. Law enforcement and protesters knelt on the ground while pastors offered prayers for the Floyd family, law enforcement and for the nation. 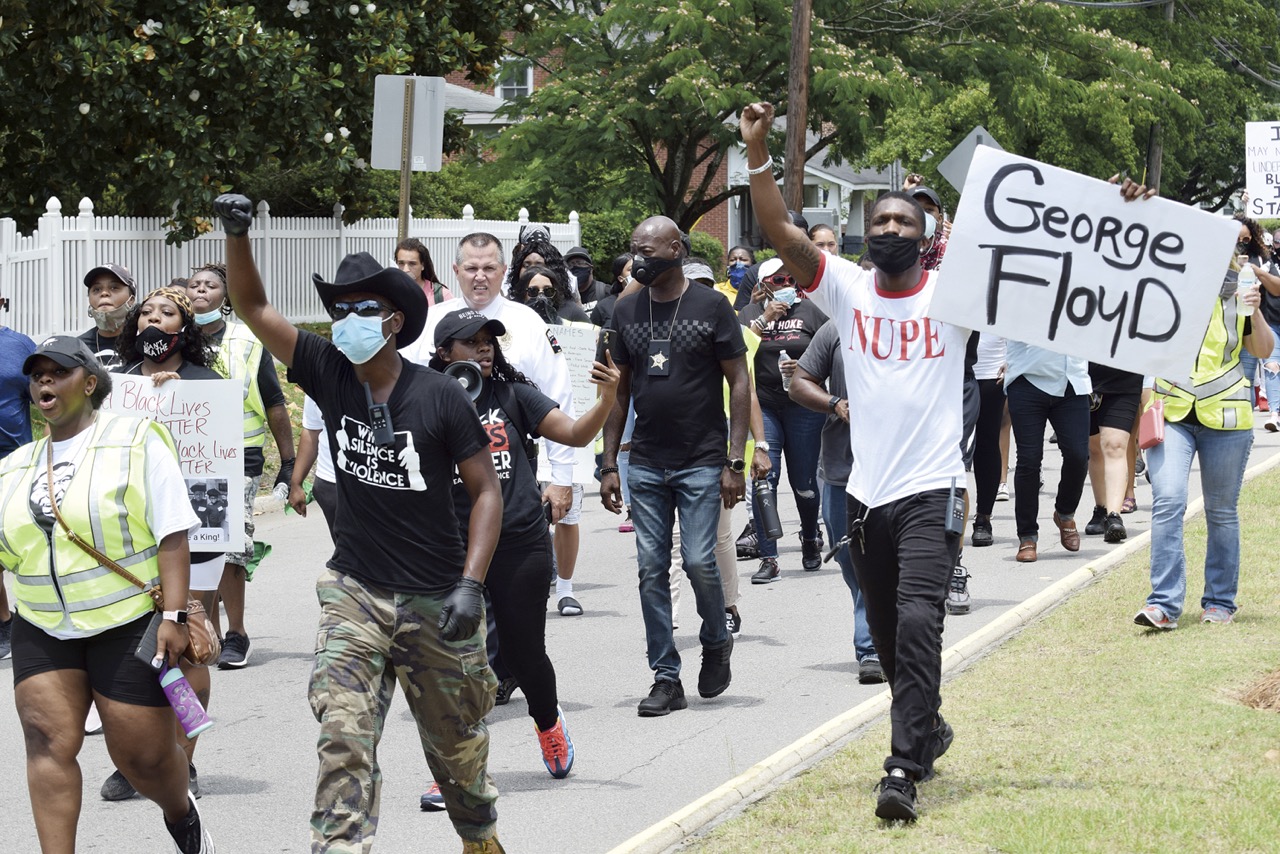