A Gold Star was presented to Lt. Benjamin F. Currie, USNR, for exceptional valor against the Japanese while operating as a pilot of a fighter plane. He is the son of Mr. and Mrs. Scott Currie of Raeford. “Fiercely countering the enemy’s powerful onslaught, Lieut. Currie fought his plane against terrific odds during this critical period and engaging a hostile bomber in close combat on Sept. 28, pressed home a vigorous attack and succeeded in shooting the enemy plane from the sky.” [Editor’s note: The man referred to in the article is Benjamin Franklin “Mole” Currie of Raeford. He died in in 1988 in Florida. He was born April 3, 1920 in Raeford, according to an online blog remembering him. A few of his exploits are recounted in the book, The First Team and Guadalcanal Campaign, by John B. Lundstrom.]

A funeral was held for William J. McDiarmid, 73, one of Hoke’s most prominent farmers. He died early Sunday morning in a Fayetteville hospital.

Raeford Kiwanis will hear a speech by M.H. Bruner of DuPont about how chemicals are changing the war effort. He will show that modern war is a conflict of chemical and that without a highly developed chemical industry the country today would be helpless.

S-Sgt. Raymond A. McBryde of the 15th Air Force, son of Mr. and Mrs. D.M. McBryde of Red Springs, has arrived home after completing 35 sorties over enemy territory as a gunner of a B-24 Liberator bomber based in Italy. He has the E.T.O. ribbon with six bronze stars, the air medal with three oak leaf clusters and the good conduct medal. He was a 1940 graduate of Hoke High School.

The supply of Coca-Cola in Raeford definitely will be affected by further curtailment in the supply of sugar after July 1 because the manufacturer of that popular drink will not compromise with the use of substitutes.

However, an equitable system of rationing will be maintained in Raeford during the shortage, according to G.C. Seymour, manager of the Aberdeen Coca-Cola Bottling Company. “I am informed that this sugar shortage is world-wide and not merely national and is directly attributed to the confusion in the production and distribution of sugar occasioned by the war,” he said.

Dr. Joseph Mark who joined the Hoke County Health Center last March, recommends it be reorganized. Mark feels with reorganization, training and supervision the Health Center should be able to continue most of its services without a doctor in constant attendance.

Columnist Sam Morris writes that Archie Byrnes and Robert Gatlin were looking at the old minutes book of the County Commissioners last week and came across something that puzzled them. In the 1911 book it stated that the commissioners had leased O’Neal’s Store for the courthouse until one could be built. Now Archie and Robert are trying to find out where O’Neal’s Store was located in Raeford.

High winds turned over the trailer home of the Charles W. Dial family in Stonewall Township. Fortunately no one was injured. Dial grabbed his five-month old daughter Tania and escaped just before the trailer overturned. Mr. and Mrs. Dial, Tania and another child, five-year-old Perry and are staying with Dial’s mother, Mrs. Annie Lee McNeill. In July 1972, another trailer home of the Dials was destroyed by fire.

Don Steed will become Hoke County’s new schools superintendent. Working as interim since Dr. William C. Harrison left in March, Steed says, “I am, of course, very pleased. I hold the office in the highest esteem and will do the very best that I can do.” Steed has worked in the system 26 years, since he was a teacher’s assistant.

Crop duster Richard McMillan had a close call when his plane’s engine quit in mid-flight. He had taken off for a routine cotton-spraying flight and put down in a field when the engine quit just inside Robeson County. He was unharmed, but the plane was a total loss, according to his wife.

Riders hit the trail for the 31st Wagon Train. Riders take a circuitous route then camp for a weekend of relaxation and fun. 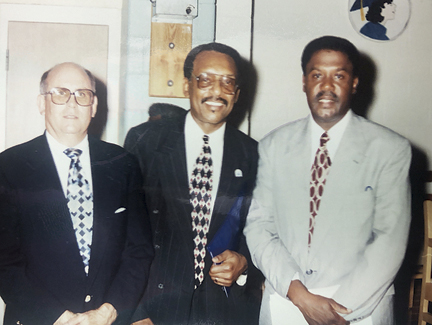