Caption: Frank Crumpler is coroner in Hoke County. He’s held the office longer than anybody has held any office in the U.S.

Only a handful of counties in North Carolina, including Hoke, Avery, Bladen and Montgomery, still have coroner’s offices. The recent House Bill 1157 moved to eliminate the office entirely in those counties. The bill passed a vote in the General Assembly, but as of Monday hadn’t received Gov. Roy Cooper’s signature.

The office of county coroner is generally considered “obsolete” because the Office of the State Medical Examiner handles most of those duties now, according to Hoke County’s state Rep. Garland Pierce. State legislators have planned for several years to remove the last few remaining offices.

“They want medical examiners to be in charge of it,” Pierce said. The bill passed almost unanimously.

While the bill concerning those three counties will go into effect January 1, 2020, the bill moved to immediately dissolve the Montgomery County Coroner’s Office.

If Cooper signs the bill into law, after 2022, the office of Hoke County Coroner won’t exist and will no longer appear on the elections ballot. Necessary tasks such as autopsies will continue to go through the State Medical Examiner’s office in Raleigh.

An end to an era

Crumpler, it appears, has outlasted his own elected office.

At 85 years old – 60 of those years spent serving as Hoke County’s coroner – he most recently won reelection to the office in 2018. Under House Bill 1157, Crumpler’s office will dissolve in 2022.

Crumpler has been Hoke’s coroner since 1960. He’s been recognized by Congress as the longest-serving elected public official still holding office in the United States.

Crumpler said he “heard it through the grapevine” that the state planned to discontinue the office of coroner statewide.

“I accomplished what I wanted to do in being the longest-serving elected official in the United States,” he said.

Asked if he is going to miss serving as coroner once his final term is up, Crumpler said “yes and no.”

His record of 60 years in elected office set a new bar for public servants.

“It’s going to be hard for somebody to beat that I think,” Crumpler said.

Even without the office, Crumpler will have plenty to keep him busy. Besides serving as coroner, Crumpler is the patriarch of Crumpler Funeral Home and the owner of “Frank’s Place” restaurant on U.S. 401 Business. He’s an auctioneer, active in the First Baptist Church and recipient of the prestigious Order of the Long-Leaf Pine award. 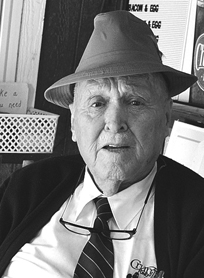