First responders dispatched to a home on the military base apparently found Luce suffering from multiple stab wounds, according to information from Camp Lejeune authorities. Responders also found another man dead at the scene, apparently the victim of a fatal gunshot wound. At the request of the next of kin investigators have not released that person’s identity, but said he was the spouse of a Marine.

Col. John H. Rochford, commander of 8th Marine Regiment, 2nd Marine Division said that the Regiment family was “saddened by the loss of one of our own.”

“In recognizing the passing of Lance Cpl. Luce, we mourn the loss of this valued member of our ‘Workhorse’ regiment. Our Marines and sailors will never forget his memory. We extend our sincerest sympathies and support to his family during this difficult time,” Rochford said in a statement.

Naval Criminal Investigative Services (NCIS) is investigating. NCIS has not released any further information about the incident.

Luce enlisted in the United States Marine Corps in 2015 and graduated recruit training in 2016, according to information from the division. He went on to graduate from the School of Infantry-East in 2016 and served with Marine Corps Security Force Battalion in Washington State before joining the 2nd Battalion, 8th Marines. His awards included the Marine Corps Good Conduct Medal, the Global War on Terrorism Service Medal and the National Defense Medal.

Luce was an Eagle Scout from Hoke Troop 410, participated in JROTC at Hoke County High School and was a member of First Baptist Church of Raeford, according to an obituary. He participated with Hoke County Recreational Sports. He was proud of his Eagle Scout Project, placing benches in McLauchlin Park.

Luce is survived by his parents, Jim Luce and Gaby Luce of Raeford; brothers, Michael Luce and Clayton Luce; and nephew, Cayden Luce. The family plans to hold a funeral Saturday, July 4 at First Baptist Church with burial with military honors in the Raeford Cemetery. 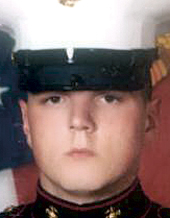 Previous PostVirus death toll in Hoke is 3Next PostOther Stuff, Not Necessarily The News