There’s a new locally-owned food truck in Raeford that’s cooking up wings, barbecue and much more.

Owner Jackie Rogers said she has always has a passion for cooking. Opening her own food business has been a dream for years, and a food truck seemed like a good way of doing it.

“I always admired cooking and have always cooked. I started out young…I just kind of jumped into it. I would always sell plates at home, sell plates at work. I just always had that love and passion for cooking, for experimenting and trying different things,” she said.

Rogers worked for the local school system for more than 14 years, and hoped to become a restaurateur. She had just purchased her first food truck in 2018 when a bad car accident took her out of commission. She had to endure major surgery and a recovery process that pushed back her plans for launching her own business.

It took a lot of work and support from family, but she and her husband Fenton Rogers were able to bring Goo-ma and Yopa’s to life. The distinctive red food truck with its black frying pan logo hit the streets in Raeford about three weeks ago.

Thanks to spreading the word through their Facebook page, Goo-ma and Yopa’s had customers waiting on them right from the start. After getting the health and safety inspection and the okay to start serving food, the local business jumped onto the scene.

On its first day in operation, the food truck sold about 800 chicken wings, Rogers said.

“Our first day was a bang. We had people lined down Thomas Drive everywhere. We were wide open. We actually sold out and couldn’t go out the next day,” she said.

The recipes are ones Rogers herself came up with. She tested them out on friends and family before launching them for the public, and sometimes brings new additions to the menu.

“I know people love wings, so we decided we wanted to do wings. The flavors of the wings, which is what people are really going crazy over, they would just come to my spirit,” Rogers said. “I started feeling better and my mind was back into getting ready to cook again. Those flavors would come to mind and I would buy the sauces and try it, experiment, mixing things up to see what tasted good.”

The “soul rolls” are Rogers’ specialty: spring roll wrappers stuffed with a variety of options, and deep fried.

“It’s the biggest hit on the trailer, everybody’s talking about the rolls all over Raeford,” Rogers said.

The soul rolls have something for everyone, including collards, loaded mac and cheese, bacon cheeseburger, loaded seafood and Philly cheesesteak offerings. The menu also includes chopped barbecue platters and sandwiches, hot dogs, fries and onion rings.

The name “Go-ma and Yopa’s” came from their granddaughter, Rogers said.

“My granddaughter named it. She calls us Goo-ma and Yopa,” she said.

Goo-Ma and Yopa’s food truck can be seen parked at various locations around Raeford, including in the Badcock Furniture parking lot on Cole Avenue and in the parking lot of Carlie C’s IGA on Main Street. Check the Facebook page, Goo-Ma and Yopa’s Kitchen, for updated schedules and locations, or call or text Rogers at (910) 670-5446. 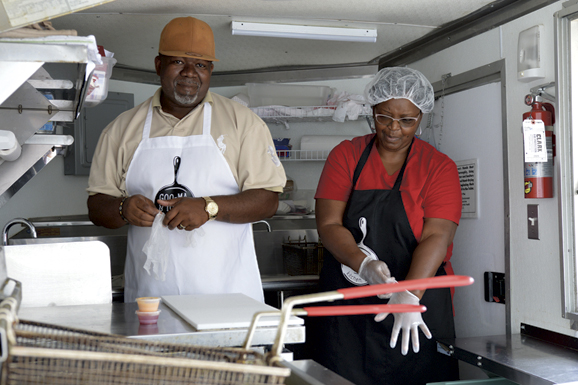 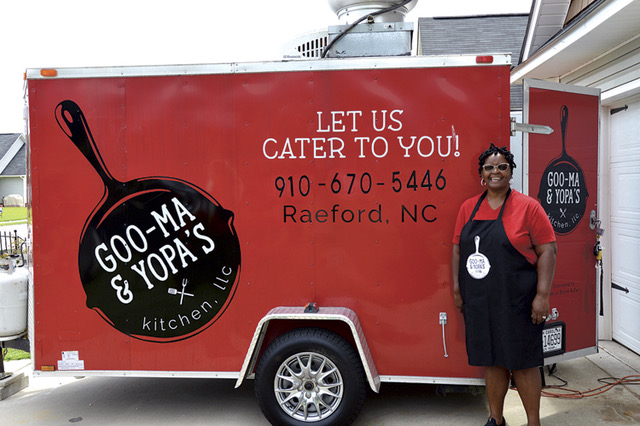