Health officials did not release the names, ages or further information about the deceased.

The Health Department is now working with Open Arms Retirement Center after two employees at the facility in Raeford tested positive for the virus. The department has tested a total of 81 residents and employees at Open Arms, Edwards said. While they’re still waiting on some of the test results, as of Tuesday all of the results returned were negative for COVID-19.

The two staff members who tested positive are isolated at home. A few more staff members need to undergo testing, but are not allowed back into work until they have gotten tested, officials said.

This is the first time since the start of the pandemic in North Carolina that anyone at Open Arms has tested positive, Edwards said.

In a congregate living setting, a COVID-19 outbreak is defined as two or more laboratory-confirmed cases, according to the North Carolina Department of Health and Human Services (NCDHHS).

Nursing homes across the state have worked for months to keep residents and staff members safe. Under Gov. Roy Cooper’s executive orders, nursing homes banned visitors, increased personal protective equipment (PPE) for staff members and increased screenings and social distancing for residents. Even with the added precautions, nursing home residents have accounted for many of the deaths due to the COVID-19 virus.

This is the second known COVID-19 outbreak in a congregate living setting in Hoke County. The first one in April involved Canyon Hills behavioral treatment center for youth, which saw 14 residents and eight employees at Canyon Hills test positive. The residents were asymptomatic and didn’t report feeling ill when they tested positive.

Those cases are reportedly resolved, and Canyon Hills was no longer considered an outbreak facility as of the beginning of June.

The Hoke County Health Department is offering free COVID-19 testing from Monday through Friday by appointment. The results are available within about 48 to 72 hours.

The department currently doesn’t have any problems getting tests or supplies, Edwards said. State health officials, however, have raised concerns about laboratories potentially running low on some materials used to process the COVID-19 tests.

More than 1,300 people in North Carolina, and more than 130,000 across the United States have died after testing positive for COVID-19. State health officials continue to urge people to remember the “three w’s”: wear a face covering in public, wait six feet apart from other people in public and wash hands frequently.

Gov. Roy Cooper issued a mandate two weeks ago requiring most people over the age of 11 to wear a face covering in public. The mandate allows law enforcement to cite businesses that do not comply with the order, but does not allow authorities to cite individuals for not wearing a face covering. However, District Attorney Kristy Newton and Hoke County Sheriff Hubert Peterkin both said they do not plan to enforce the mandate.

Peterkin said via text message Tuesday that several personnel at the Hoke County Sheriff’s Office tested positive for the virus. The office is open and operating this week.

Hoke County Schools officials released last week three possible options for what the school year will look like this fall. In the best-case scenario, all students will be able to return to class in person with additional precautions such as social distancing and temperature checks. A more moderate approach would see students split into two groups and attending in-person classes only two days a week, while the worst-case scenario plan would see online-only remote learning. 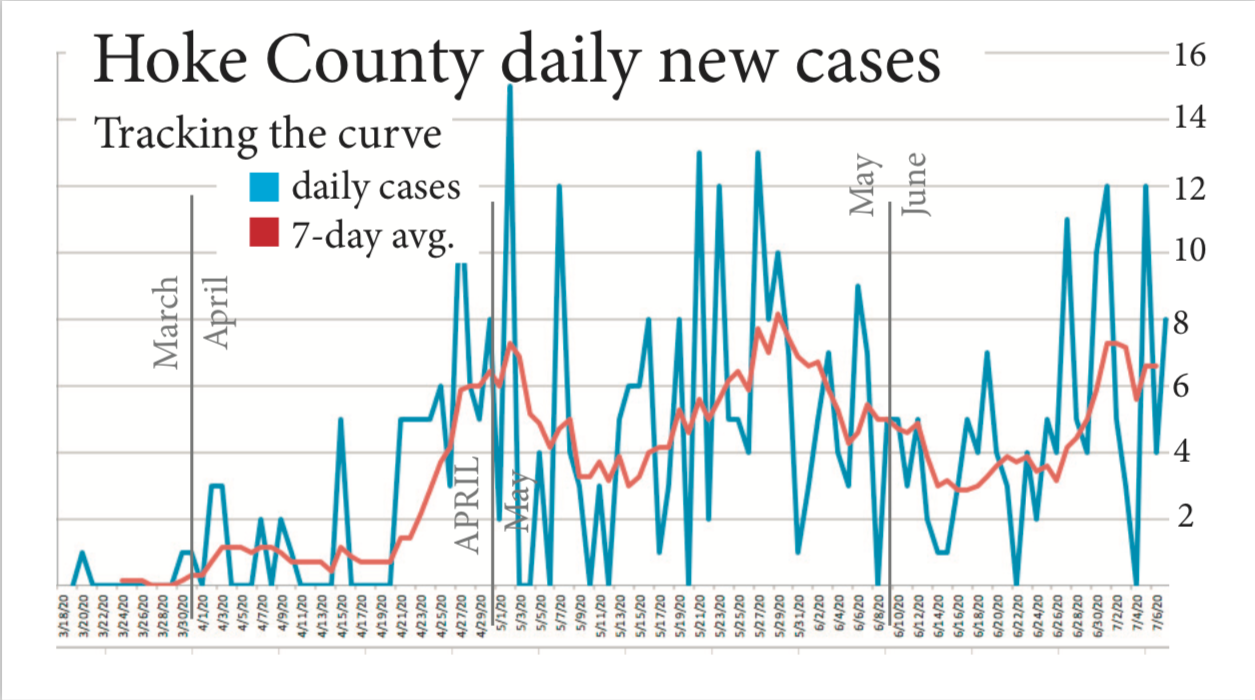