“It’s a great morning for Hoke County and its citizens. We wanted to call you together to see that your tax dollars in Hoke County are working real good for you and real well,” Commission Chairman James Leach said in opening remarks, as a crowd of elected officials, county staff members and invited guests gathered Thursday to celebrate the grand opening of the new Robert A.Wright Hoke County Agricultural Building.

The ceremony was a family affair for Wright and his wife Shirley, affectionately known as “the other Commissioner Wright” among the board members because of her dedicated support of her husband and the county.

Commission Vice Chairman Harry Southerland and Commission Allen Thomas presented commemorative certificates to both Wrights in honor of the occasion. When it was time to pick up the giant pair of golden scissors to cut the ribbon, a group of children stepped up to the task to usher in the building named for their grandfather.

Wright has served as a Hoke County commissioner for around 20 years, and was a member of the Hoke County Board of Education member for 10 years before that. Southerland praised County Manager Letitia Edens and Public Buildings manager James Tedder, and all of the county staff who worked on the project.

“It’s been a team effort and I just wanted to say thank you to the team, because without you none of this would be possible,” Southerland said.

Naming the building after Wright, who is also a longtime local farmer and agriculture supporter, was an easy decision for the board.

“Now, why are we naming the best building in Hoke County after Bobby Wright? I’ve only got two words for you, first class. Bobby Wright is the most unselfish man on our board,” Southerland said.

World War II veteran Wendell Young was a guest of honor at the ceremony. A longtime local supporter of farming, Young would often ask commissioners about constructing an agriculture building for Hoke County.

The ceremony also included remarks from other board members, Rep. Garland Pierce and members of the Bobbitt Design-Build team that constructed the new agriculture center.

Wright thanked the board for dedicating the building in his honor, and said the county has the best team of people in the state working for them.

“It’s nice to see that we’ve got so many friends in Hoke County. It means so much to me,” he said.

The building will help support agriculture for years to come, and “it’s something that’s so important that I don’t know how to put it in words,” Wright said.

The recently completed building will house the Hoke County Cooperative Extension and serve as a base for other local agricultural activities. The building features a large meeting space that can also double as an emergency shelter. The center also has kitchens for catering and for cooking demonstrations, and office space.

The county paid cash for the roughly $4.8 million building. The project broke ground last August and construction wrapped up in May. 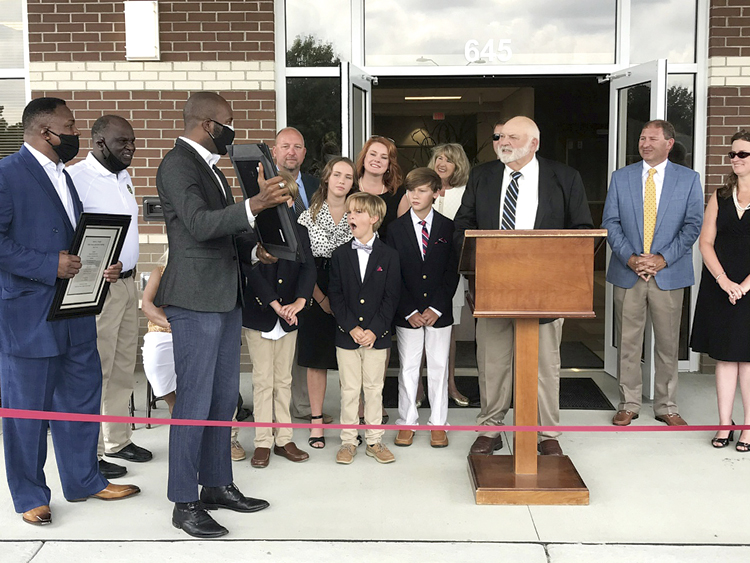