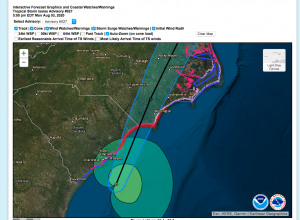 By Catharin Shepard • Staff writer • Tropical Storm Isaias looks to bring some wind and rain to Hoke County overnight Monday and into Tuesday, but will hopefully move out of the way fairly quickly, Hoke Emergency Management Coordinator Andrew Jacobs said.

Downtown Raeford began to see some intermittent rain Monday afternoon ahead of the storm, with the main force of Isaias set to begin later Monday evening and intensify in the early morning hours.

Localized flooding and downed trees that could block roads and take out power lines will likely be the biggest impacts to the county.

“Those areas that always flood will flood,” Jacobs said.

The storm’s track continues shifting slightly, and its final path will determine exactly how much rain Hoke gets. The National Weather Service in Raleigh has Hoke under a Tropical Storm Warning, and predicted Hoke could receive anywhere from two inches to five inches of rain, based on the most recent storm track. Winds could reach about 30 miles an hour sustained, with gusts up to 60 miles an hour, but that could also change depending on where the storm tracks.

So far Isaias has “a good track record of being a quick-moving storm,” Jacobs said. If the tropical storm continues its current pace, it should move out of the area by midday Tuesday.

As of Monday afternoon the county does not plan to open an emergency shelter for this storm, Jacobs said.

The county has activated the emergency operations center to monitor Isaias as it approaches and passes through the area. Hoke County government offices are still expected to open as usual Tuesday. Check hokecounty.net or readyhoke.org for more updates.