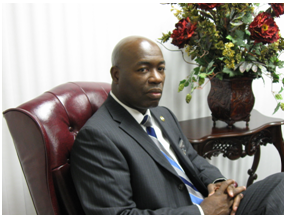 Hoke County Sheriff Dr. Hubert A. Peterkin recently completed a Doctor of Management degree, graduating from the University of Phoenix.

Peterkin is now the only sheriff in the state to hold a doctoral degree, and may even be the first sheriff in North Carolina with a Ph.D, he said.

The sheriff has been working on the degree for some time and finished it recently, he said. Given the pandemic, he did not have a graduation ceremony out of concern for people’s safety.

“Right now everything’s on hold,” he said. A small ceremony that is live-streamed to the public could be in the works for the future.

The late Raz Autry, who helped with Peterkin’s election campaign before his death, was a big influence in why the sheriff pursued a doctorate.

“He was very insistent on me going further, and I’m glad I did,” Peterkin said.

It took many years of work, and he’s come a long way from where he started as a student attending Hoke High. It’s “humbling,” he said.

“For me to be on this level is just humbling, I can’t find the words to express where I’m at right now,” Peterkin said.

Working on the degree was challenging, the sheriff said, but ultimately rewarding. Being Hoke County sheriff is even more so, he said.

“I have not had anything so rewarding in my life as serving as the sheriff of this county. I can see progress here,” he said.

Peterkin said that he’s not planning on going anywhere anytime soon. He’s not looking at taking another job or running for a different political office. Serving in Hoke County is something special to him, the sheriff said.

“I feel like being sheriff here is not a job, it’s a calling for me,” he said.

He hopes his new degree can help him be more proactive in addressing change.

People in the community have been very encouraging and supportive of the endeavor, Peterkin said. In a statement he thanked his family for their unconditional love and support, and the Hoke County Sheriff’s Office staff for their encouragement and patience.

“This is for you! As the elected sheriff of this amazing county, my goal has always been to be my best for all of you and most importantly, to do my very best,” the statement said. “Moving forward please continue to pray for my staff and I and other law enforcement as well.”