Hoke County’s new recreation and aquatics center will be named in honor of longtime county commissioner and board chairman, James A. Leach.

The county board made the announcement at a dedication ceremony held Monday night after the board conducted its regular business. The long-planned Parks and Recreation facility will be called the James A. Leach Aquatic and Recreation Center.

“Tonight we come to make history,” Vice Chairman Harry Southerland said in remarks during the ceremony.

People in Hoke County have been talking about building a recreation center and public swimming pool for more than 20 years, Southerland said, and after more than two years of work, the county commissioners are making it happen.

“I think that as a board, we have a responsibility. That when you’re in a position of power and authority and you can do better, you have to do better, so tonight we want to show y’all what better looks like in Hoke County,” he said.

After Leach recused himself to sit in the audience, Commissioner Bobby Wright made a motion to name the aquatics center in Leach’s honor for his decades of service to the county. The motion passed unanimously.

“There you have it, we’ve got a new building coming,” Southerland said. “…The chairman always says this, Hoke County is the best county in North Carolina, and tonight you’re going to believe it.”

The other commissioners honored Leach, his wife Valerie and their family during the ceremony. The couple’s two children attended the event, including their daughter who traveled from Louisiana to take part in the dedication.

Commissioner Tony Hunt shared his memories of a snowstorm when Leach, who was at the time pastor of a church in Moore County, rounded up a group of people to help take kerosene to an elderly woman whose fuel had run out.

“That shows you the kind of man that he truly is. He’ll step out to help those who can’t help themselves,” Hunt said. “I’m proud tonight to be your friend. I’ve enjoyed these years with you, and there couldn’t be a greater name on this building than the name we’re putting up on it, because this man loves children and he’ll fight for them to the end.”

Speakers also pointed to Leach’s work as a commissioner toward building several public schools, including Sandy Grove Middle School, and other projects such as the county’s wastewater treatment plant, the new agriculture center, several community buildings and more.

Wright, who has served on the board with Leach for the last 20 years, praised his fellow commissioner for his efforts to help the county. Serving on the board with him for so long taught him a lot about Leach, Wright said.

“He always talks about Hoke County being number one, but he doesn’t only talk about it, he does the things that make it possible for Hoke County to be number one. It’s easy to talk, but it’s harder to actually do the work to make it happen, and that’s what he’s doing. That’s what makes James so special.”

Hoke County Board of Education members attended the event and presented Leach with a plaque. Chairwoman Irish Pickett recognized the partnership between the commission and Board of Education, and congratulated Leach on the honor.

“This dedication reminds me of a song…give me my flowers while I yet live, so I can see the beauty that they bring,” she said. “Tonight I’m so glad that this building is being dedicated while you’re living…so often we wait until someone dies, then we want to put their name on a building. Do this while someone is living, is what I say.”

Mrs. Leach said the honor was a big surprise, and that it is the Leach family’s “utmost pleasure” to continue to serve Hoke County.

“I am absolutely incredulous and had to be here to believe this is actually true. This is a once in a lifetime opportunity, and we thank you for it,” she said.

Leach thanked the commissioners for the recognition and for supporting the recreation center project, and his family for their support through the years.

“This meant so much to me. I thank them so much for taking the time to do this, and thinking I’m worthy of $20 million-plus. There’s a plus, in the back we’re going to have a special park for special needs kids only. I think they need to have a place that belongs to them,” he said.

“Certainly it’s for the citizens of Hoke County. It’s for you to be able to use and be able to go out and use our services. Thank all of you for coming tonight and sharing this occasion.”

The new James A. Leach Aquatic and Recreation Center is still in the design phase, but the project is moving toward being able to break ground. A groundbreaking ceremony date hasn’t been announced yet, but is coming soon, officials said. The project is expected to cost around $20 million, possibly more if the county adds a playground for children with special needs.

Robbie Ferris of the SFL+A architect firm, which is handling design and construction of the project, praised the county’s work on making the center a reality.

“I’ve been around Hoke County a long time. I grew up in Fayetteville, next door. I was walking around downtown, and I was thinking man, I love this town, I love this place,” Ferris said. “And all these people talking tonight, I was listening to comments and thinking wow, this is so special. Then when the school board and the county commissioners got up here together, I thought, these folks are so blessed, they have no idea how blessed they. I go to school board and county commission meetings around the state, and it’s not like that, folks. I thought of the word family. Y’all are a family.”

The center will include an indoor gymnasium, an indoor walking track, a regulation-sized swimming pool with spectator seating on the second floor, a smaller family-friendly pool for children, rooms for classes and events and office space for the county Parks and Recreation department.

The Hoke High swim team will be able to use the center for training and holding swim competitions. The county also plans to rent out space for families to hold pool parties for children.

The building will be located at the newly addressed 5215 Fayetteville Road, near the intersection of Scull Road and Fayetteville Road in East Hoke. The design features large exterior glass windows for natural lighting around the pool area, and a color scheme in shades of grey, blue and gold. 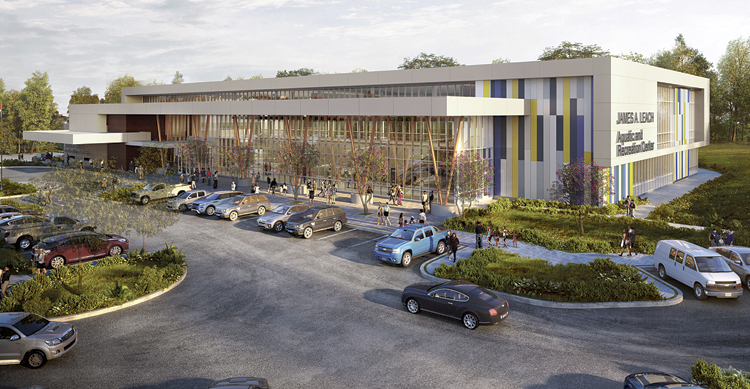