Four Hoke County firefighters jumped into action last month to save the life of a 14-month-old baby when the little boy choked on a penny.

When Stroud found her baby unresponsive and not breathing, she called 911. Firefighters from Puppy Creek met her outside her home, with the mother running to them with her son in her arms, reports said.

Puppy Creek Fire Department Chief John Joseph was there on the scene as the four firefighters worked to save the baby’s life. The baby had no pulse and wasn’t breathing, and had turned gray, the chief recalled.

“That child was lifeless when they arrived,” Joseph said.

The ambulance was five to seven minutes away, and time was of the essence. The firefighters performed lifesaving measures until Karter began breathing again.

“When the ambulance arrived, these guys had already restored respiration,” Joseph said.

Paramedics rushed the infant to the hospital. Thanks to the first responders’ quick response, Karter survived and was able to go home from the hospital the same day, officials said.

Causey said he attempts every day to recognize the contributions of first responders.

“These men and women put their lives on the line every day to keep us safe. There’s not a week that goes by that I don’t hear some story about somebody having a heart attack, and because the local fire department, the volunteer fire department was so quick to get out there, they saved somebody’s life,” he said. “This is a case with a child. It teaches all of us to be very alert and be aware of your surroundings and not leave anything around a small child that they could put in their mouth, even a penny. Even something as innocent as a penny laying around on the floor could be a choking hazard and cause the death of a child.”

Especially in rural areas, fire departments serve a vital role, Causey said. Causey himself grew up in a rural community where dirt roads were common and firefighters were often the first on the scene at any life-threatening scenario.

Joseph thanked Causey and his office for honoring the firefighters. The firefighters and their families present enjoyed a catered lunch following the ceremony. 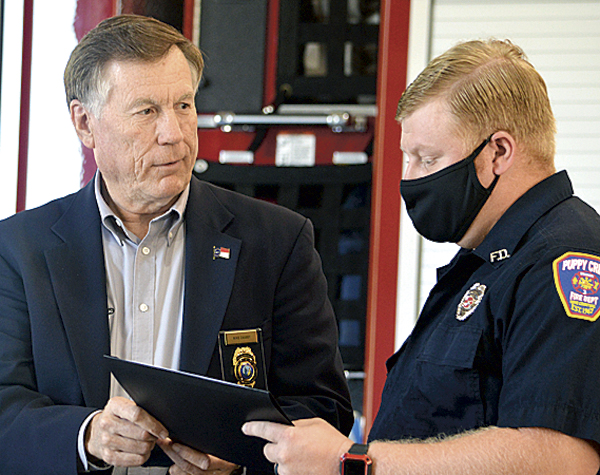 Previous PostThursday clinic is for those needing rent, utility helpNext PostVirus deaths at 25 in Hoke County