‘This is beyond imagination,’ — Line of 200 first-day early voters

By Catharin Shepard and Ken MacDonald •

When early one-stop voting opened last Thursday morning, a line stretched back past the Raeford Post Office and down the block as voters waited to be among the first to cast a ballot in person for the 2020 General Election.

Even though the line moved quickly, it lasted for hours as hundreds of voters turned out to the Hoke County Board of Elections site – which is one of two one-stop early voting locations in the county.

The poll workers allowed six people at a time inside as a safety precaution against spreading COVID-19. Board of Elections Secretary John Harry, and Elections Director Towanna Jackson both said they hadn’t ever seen anything like it before in Hoke County.

“Never, and I’ve been here since 1993, as a candidate and as a board member for the Board of Elections in Hoke County,” Harry said.

“We were prepared for a line, we’re prepared to serve the public, but what I see here today as the people are coming to vote – yes, this is beyond imagination.”

Among those standing in line was James Ivey. At around 9 a.m. he said he’d been in line about an hour. “Not too bad,” he said. “It’s the right thing to do. Everybody needs to vote right now. It’s a bad time right now,” he said.

Kenneth Carter said the wait was worth it, “because of the way our country is going—we need change,” he said.

A recorded 4,382 Hoke voters turned out in person to cast a ballot in the first four days of one-stop early voting for the 2020 General Election, according to the Hoke Board of Elections.

That number doesn’t include the more than 1,500 civilian mailed-in ballots that the county office has so far received. All told, more than 5,800 ballots had already come in through the one-stop and mailed-in absentee combined as of Sunday, according to the elections office.

In comparison, about 7,200 people total in Hoke County voted either by mail or in person during the entire early voting period of the 2016 presidential election, according to News-Journal records.

While the lines of the first day haven’t been as long since then, more voters continue coming every day to cast a ballot. Some have even showed up as early as 6 a.m. before the office even opens, Jackson said. The elections director, who has worked for the elections office for 10 years, said she had never seen such a large turnout all at once.

Of the 4,382 Hoke voters who cast an in-person ballot from Thursday to Sunday, 2,582 were Democrats, 788 were Republicans, 990 were unaffiliated, six were Libertarian and three were Green Party, public records showed.

The first few days mostly went smoothly, except for a problem with the ballot machine at the Rockfish site on the first day. Jackson said that the machine had a problem initially with its programming.

The machine was wrongly programmed to only accept ballots from the Rockfish precinct, instead of accepting ballots from any precinct during the one-stop early voting. Jackson was present at the Rockfish site, and fixed the “election definition” on the machine so it would accept all ballots, she said. Then Jackson and another poll staff member ran the ballots through the machine once the problem was fixed.

Voters at the Rockfish site were able to cast a ballot in the election despite the initial issue, Jackson said.

Some voters were pleased with how the process has worked this year. Paul and Brenda Germain sent an email to elections officials thanking them for their efforts; the elections staff shared the email with The News-Journal.

“This year was the first time my husband and I participated in early voting. We would like to commend your staff of the excellent job they have done and the well-thought out planning. The idea of giving away the pens we used on our ballots was outstanding, especially during this pandemic,” the Germains wrote in the email. “As disabled and older voters we were pleasantly surprised by the car-side service offered to disabled voters. How incredibly thoughtful and kind! Great job done by all! A big thank you to all for your efforts, they are appreciated.”

Voting by mail is also available. For detailed instructions on how to vote by mail, go online to https://www.ncsbe.gov/voting/vote-mail. Voters can track a mailed-in absentee ballot using the state’s BallotTrax system online at https://northcarolina.ballottrax.net/voter.

Registered voters who plan to vote in person on Election Day can locate the assigned polling place using the online voter registration tool available at https://vt.ncsbe.gov/RegLkup. The online tool also shows a sample ballot, so voters can see what races and candidates are on the ballot before they vote.

For any questions about election matters, contact the Hoke County Board of Elections at (910) 875-9062, or visit https://www.hokecounty.net/235/Elections for more information. 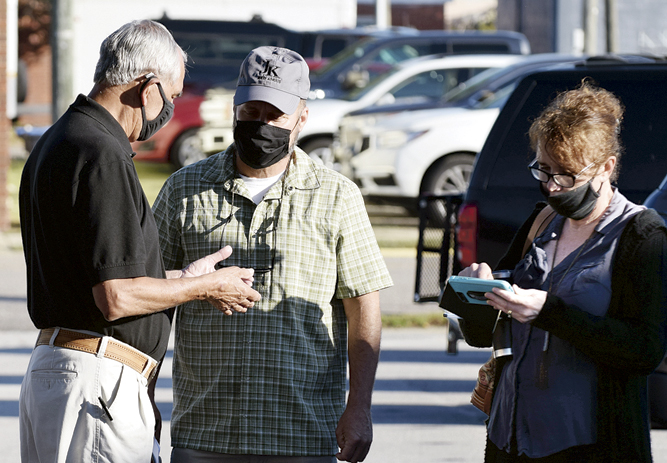