[Photo courtesy of Hillcrest Fire Department] A man from St. Pauls was killed Wednesday morning when his van collided with a cement mixer in Raeford, according to authorities.

The accident happened on U.S. 401 Business near Rockfish Road around 11:14 a.m. Wednesday, December 2. Driver Kelvin Wilcox, 40, of St. Pauls apparently crossed the centerline of the road in his vehicle and struck a cement mixer head-on, according to the North Carolina Highway Patrol.

Wilcox was killed in the accident. Authorities notified his next of kin before releasing his identity to media.

Edward Lora, 43, the driver of the cement mixer was also injured. Emergency medical responders transported Lora to Cape Fear Valley Medical Center in Fayetteville for treatment. Lora is expected to recover, according to Highway Patrol Trooper McDonald, who is handling the investigation.

Due to the impact the cement truck rolled onto its side, completely blocking travel on U.S. 401 Business. Hillcrest Fire Department reported on the station’s Facebook page that the cement truck was leaking diesel following the accident. Hoke County Emergency Management and the Regional Hazmat Response Team 3 from Fayetteville responded to clean up the diesel leak.

It took heavy wreckers from three towing services – Phillips Towing, Richards Towing and Daniels Towing – to get the cement truck upright again and moved out of the road, according to the fire department. The truck was from Southeastern Ready-Mixed Concrete.

Wilcox was an employee at Raeford Flowers and Gifts, a Facebook post from the local business said.

“He was a valued member of our family and staff. Kelvin will be missed by all who knew him. As we are a small family owned business, we will be closed for the remainder of the week. Please keep his family in your thoughts as they go through this difficult time,” the business stated. 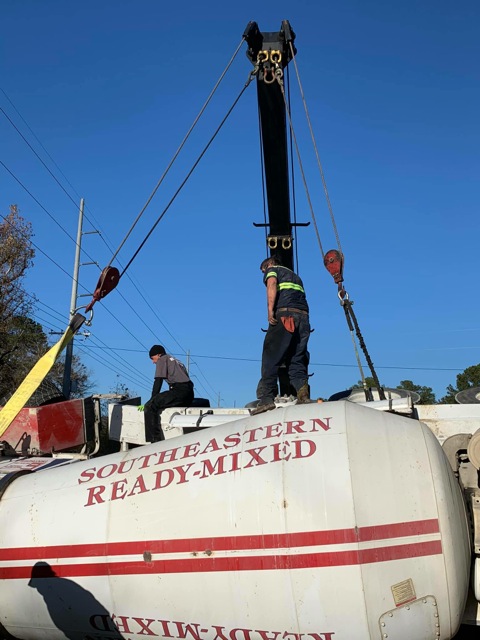