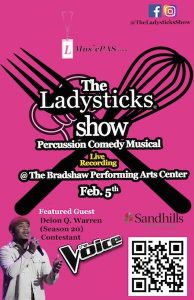 Performing artist Ladysticks is seeking the community’s support as she puts on a show to benefit a scholarship in honor of the late Dr. Mary Kemp Thomas.

Ebony Peterkin, known as Ladysticks, is a globetrotting percussionist who’s played venues around the world. Raised in Hoke County, she attended a performing arts high school in Los Angeles and went on to tour many different countries. She returned home and launched a performing arts school that trains youth in a variety of arts including music and dance.

In her upcoming performance, “The Ladysticks Show,” people can get a glimpse of her journey from Hoke to California, to venues around the world and back again, all while supporting a scholarship fund in honor of Dr. Mary K.

The Ladysticks Show, a percussion comedy musical, is set for February 5 at the Bradshaw Performing Arts Center. Proceeds from the tickets will go to support the Dr. Mary Kemp Thomas Scholarship to help students pursue education.

This will be Ladysticks’ first time performing a show in North Carolina. The show will be recorded live. The performance will also include featured guest Deion Q. Warren, a competitor from season 20 of The Voice singing competition television show.

Ladysticks said she hope all of Hoke County will buy a ticket to come out and show support for the late Dr. Mary K and education.

“I think it’s a wonderful way to keep her legacy alive and keep young people inspired to go to the top,” Ladysticks said.

Dr. Mary K. is recognized as the first graduate of Sandhills Community College. The community college unveiled last year a special statue on its Raeford campus in honor.

Ladysticks noted that Sandhills Community College President Dr. John Dempsey has been a longtime supporter of her own pursuits.

“I’m going to give him a show like he’s never seen before,” she said.

For more information, visit https://www.sandhillsbpac.com/events, or go to https://ticketmesandhills.com for tickets. Tickets are $15 in advance and $20 at the door.