Home News Music, dance bring inspiration at MLK banquet
News
January 19, 2022January 19, 2022
0 0
[Photo: A dancer with Yvette’s Dancer Academy is lifted into the air during a performance at the banquet. (Photo by Catharin Shepard)]
By Catharin Shepard • Staff writer • Dancers, singers and guest speakers paid tribute Monday to Dr. Martin Luther King Jr. and the Civil Rights movement with performances in front of a sold-out crowd.

Hundreds of people packed the Robert A. Wright Agricultural Building Monday night for the 2022 Dr. Martin Luther King Jr. Day banquet. The banquet was a collaboration of local community leaders, organizations and businesses meant to recognize the special occasion.

Pastor Ophelia Ray of Full Effect Gospel Ministries spoke about the purpose and meaning of coming together to celebrate MLK Day.

“For the Civil Rights leader who is well known for his nonviolent approach, for bringing  racial equality in America, today this national holiday is observed across the nation. But what does it mean today and why is it important?” she said. “The observance of this day is not just to honor a great man and his legacy, but it brings out a reminder of where we have been, where we are, and how far we have to go.”

Ray was one of many people who shared inspiration during the banquet.

The vocal trio 1achord, featuring Hoke County High School graduate Tavis Cunningham, and Christoff Hairston and Julian Kennedy performed gospel music. 1achord competed last year on the television show America’s Got Talent, making it all the way to the semifinals. The trio members are all students at the University of North Carolina at Greensboro, where they met while singing in the cafeteria. Hoke County Commissioner Harry Southerland welcomed 1achord for their first performance as a group in Hoke County.

The students of a local Black-owned performing arts business in Hoke County put on a show for the attendees. Dancers from Yvette’s Dance Academy performed a dance routine they named, “Glory.”

There were several guests from beyond Hoke County in attendance at the head table, including former Chief Justice Cheri Beasley, and North Carolina Democratic Party Chair Bobbie Richardson. Many local officials also attended the event.

Organizers weren’t sure exactly how many people attended the banquet, but said they went far past the original planned sale of 200 tickets.

The banquet was one of multiple events planned in Hoke County to celebrate the day. Louis Chapel Missionary Baptist Church held a live-streamed service attended by local elected officials. The service is available to view on the church’s Facebook page. A planned unity march that was set to take place in downtown Raeford Monday afternoon was canceled, after the area received winter weather over the weekend.

April Lynn Stubbs, 18, is the daughter of Patrice Stubbs and Sim Peterkin. She is a member of Freedom Chapel AME Zion Church, where she serves as an acolyte and holds other various positions. She is a senior at SandHoke Early College High School, where she is a member of the National Society of High School Scholars. She is the trumpet section leader for the Mighty Marching Bucks, and has received the Jimmy N. James Award. She will be attending Winston Salem State University in the fall where she plans to major in exercise science and play for the Red Sea of Sound.

Dévia Machiah Stroud, 20, is the daughter of Mitchell; Latonya Benjamin and the granddaughter of Roosevelt and Helen McLean. She is a member of Rockfish Grove Free Will Baptist Church and she also attends Flame of Fire Outreach Ministries, where she has volunteered in several ministries by feeding the homeless. She is a 2021 graduate of Hoke County High School. She is a first-year student at Shaw University in Raleigh where she is majoring in biology to fulfill her dreams of becoming a geneticist.

Christopher Isaiah Joe, 18, is the son of retired Master Trooper Stevie Joe with the North Carolina State Highway Patrol and District Court Judge Regina Joe. He was raised in the Silver Grove Missionary Baptist Church family. He is currently a senior at Hoke County High School where he has a leadership position with the Mighty Marching Bucks. He has maintained excellent grades throughout his honors courses and attended North Carolina Governor’s School for Instrumental Music. He has received the John Philip Sousa Award recognizing superior musicianship, leadership, dependability, loyalty and cooperation. He has been accepted through early decision at UNC-Greensboro but is considering alternatives before settling on an educational path. He plans to major in music education.

Zi’Yon Maurice Southerland is the son of Elvenikia Southerland and Dre’ Marshall. He attends Inspirational Temple Ascension Church of God. He plans to attend UNC-Wilmington to major in film studies. He plans to further his education in digital production and editing. He enjoys his family, friends, video games and sports.

Ramani’ Lani Harding is the daughter of SFC Louis; Carlonda Colston Jr. She has been an honor roll A/B student from the beginning of her primary school years and has received awards including the highest grade level math award, citizenship award and President’s Award, and Academic Excellence Award. Some of her community involvement includes volunteering at Unilever, the Hoke County Open Door Soup Kitchen, Hoke Reading and Literacy Council and more. She will be graduating in May 2022 from SandHoke Early College High School and Sandhills Community College with her high school diploma and an associate’s degree in science. She plans to attend Winston-Salem State University and pursue a career in nursing.

Amon Wallace, 17, was a straight-A student in elementary and middle school, won high school vice president in his sophomore year and has volunteered to help provide meals to the poor and homeless. He has a passion for cooking and enjoys experimenting in the kitchen. 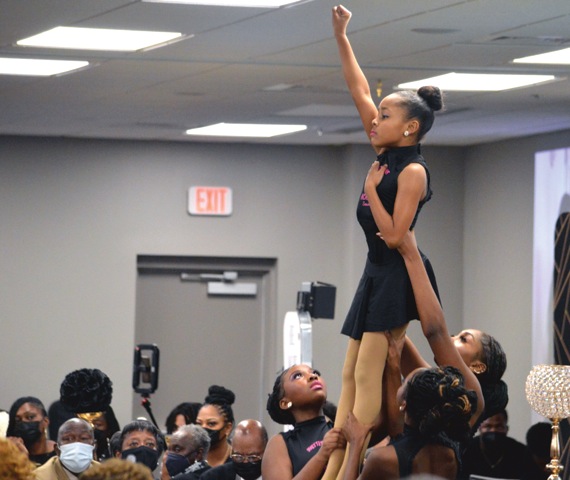